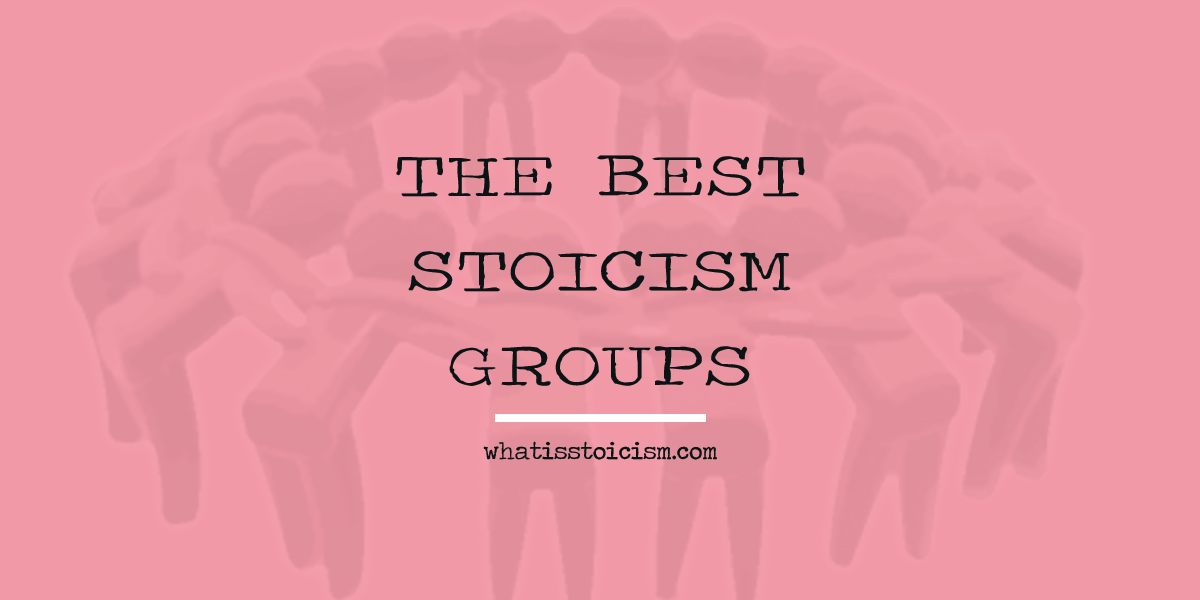 One of the stranger misconceptions about Stoicism is that it is an individualistic philosophy focusing only on self-discipline. The reality is quite the opposite – Stoics believe, as Marcus Aurelius put it, that humans exist for the sake of one another. The extension of that message is that we should make an effort to socialise and cooperate with others. That we should help, support and respect friends, family, and strangers alike.

With that in mind, anyone studying Stoicism today would do well to seek out and interact with other Stoics to find out how the philosophy plays a part in their lives. Sharing our own stories and expertise also contributes to the common good.

The best place to start of course is online, so I have compiled some of the most popular places Stoics can be found interacting. Why not get involved!

Description: The r/Stoicism subreddit, a forum for discussion of Stoicism, has well over 200,000 members. There are also many other Stoicism-related subreddits, such as r/StoicMemes/, r/Stoic/ and r/stoicquotes/

Quora is a platform to ask and answer questions, and although it isn’t as active as reddit for Stoicism discussion, it’s still a good place to connect and share knowledge. The Stoicism topic on Quora has over 19,000 followers, while the Marcus Aurelius topic has over 23,000.

Description: Open group, established in 2013 for the discussion of Stoic philosophy, and sharing resources. Owner/Moderator: Donald Robertson, author of Teach Yourself Stoicism (2013) and How to Think Like a Roman Emperor: The Stoic Philosophy of Marcus Aurelius (2019).

Description: Practicing Stoicism is likened to developing a skill, or apprenticing a profession. As with all arts, one must begin somewhere. It is my hope that this group will provide a sturdy beginning.

How to Think Like a Roman Emperor
By: Donald Robertson

Description: Closed Stoic group ONLY for people who have completed courses run by Donald Robertson. http://learn.donaldrobertson.name/

Description: A group discussion for those familiar with the Daily Stoic site and book of the same name by Ryan Holiday.

A Handbook for New Stoics Discussion Group
By: Massimo Pigliucci and Gregory Lopez

Description: The purpose is this group is to help people who are working through A Handbook for New Stoics / Live Like a Stoic (UK edition). The group is closed to allow for a little more privacy if you’d like to discuss personal struggles or issues you’re having with Stoic practice.

Description: This is a mastermind for people who are committed to learning and practicing Stoicism, and for those who are interested in discussing the practical applications of Stoicism.

Stoicism and Sports
By: Cody Rogers and Brendon Tod

Description: This is a forum to discuss the role of Stoicism in sports; whether in be in improving athletic performance, the impact of sports on society or just coping with the loss of your favourite team.

There are also many location-specific Stoic Facebook groups, the best of which have been compiled here by Modern Stoicism.

Taking the search offline and into the real world, a lot of local groups have been established allowing people to actually meet with fellows Stoics in their area.

Two sites that provide handy location maps are Meetup and The Stoic Fellowship. And if your local area doesn’t have a Stoicism group, why not start one!

Exercise: Learn To Want What You Have