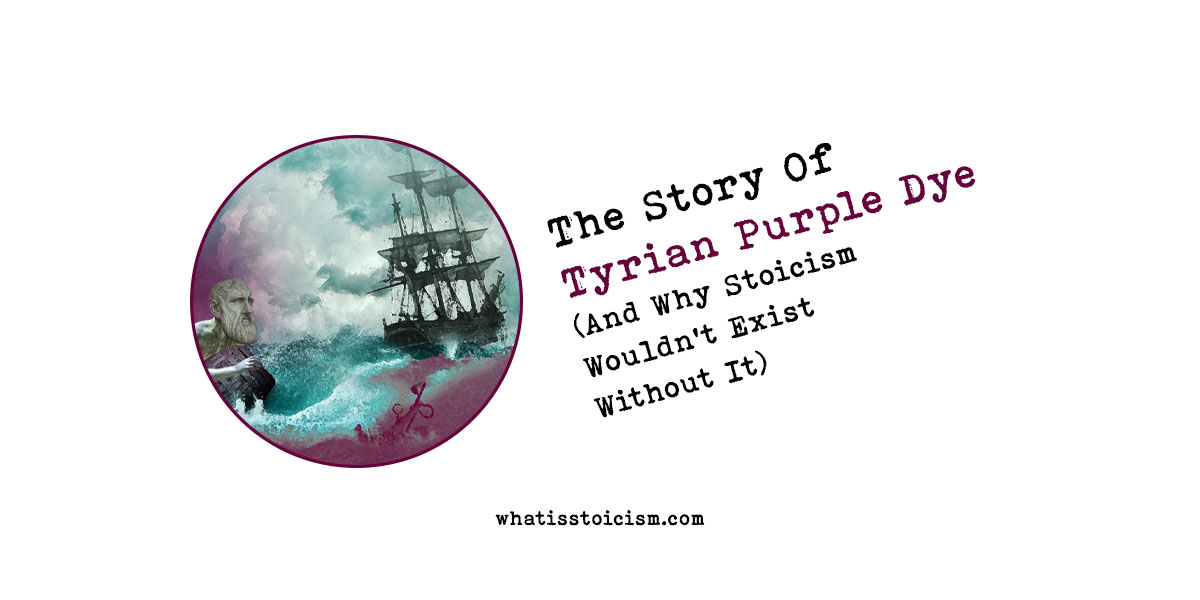 In ancient times, Tyrian purple was THE color to be seen in.

And without it, Stoic philosophy may never have existed.

The specific purple we’re indebted to took the form of a reddish-purple dye and had several other names in ancient times including:

The dye was a prized good of the ancient Phoenicians who built their wealth trading it and fabrics dyed with it.

Tyrian purple’s high value was in part due its labor-intensive extraction process.

It was derived from the hypobranchial gland of the Murex marine snail and tens of thousands of snails were required to extract even a small amount of dye.

Tyrian purple subsequently became a status symbol in several civilizations, including among the Romans.

The Roman mythographer Julius Pollux, writing in the 2nd century CE, asserted that the purple dye was first discovered by the dog of Hercules.

In Pollux’s story, Hercules and his dog were walking on the beach on their way to court a nymph named Tyro. The dog bit a sea snail, and the snail’s blood dyed the dog’s mouth Tyrian purple. Seeing this, the nymph demanded a gown of the same color, and the result was the origin of purple dye.

This story was depicted by Peter Paul Rubens in his painting Hercules’ Dog Discovers Purple Dye.

Senior Roman magistrates wore a toga praetexta, a white toga edged with a stripe of Tyrian purple, while a toga picta, which was solid Tyrian purple with a gold stripe, was worn by generals celebrating a Roman triumph.

By the fourth century CE, sumptuary laws in Rome had been tightened so much that only the Roman emperor was permitted to wear Tyrian purple.

But back to purple’s connection with the existence of Stoicism, which was founded in early third century BCE.

As we’ve seen, it was the Phoenicians who had exclusive command over Tyrian purple and it was the misfortune of one of their merchants that indirectly led to the founding of Stoic philosophy.

That merchant, Zeno of Citium, was on a voyage to transport his dye across the Mediterranean when he suffered a shipwreck and ultimately ended up in Athens.

With no ship, and with his precious dye dissolved in the sea, Zeno was left wandering the foreign streets having lost everything.

According to Diogenes Laërtius, Zeno, desperate for guidance, “consulted the oracle to know what he should do to attain the best life, and that the god’s response was that he should take on the complexion of the dead. Whereupon, perceiving what this meant, he studied ancient authors.”

He was so impressed with the book’s portrayal of Socrates, and Socrates’ views on wisdom, that he asked the bookseller where he could find men like the famous philosopher.

Just then, Crates of Thebes — the famous Cynic philosopher— happened to be walking by, and the bookseller pointed to him.

Zeno went on to study under Crates and a host of others before beginning to teach in the colonnade in the Agora of Athens known as the Stoa Poikile, which ultimately led to his founding of the Stoic school.

So, a fateful journey in the name of Tyrian purple was the starting point for the foundation of Stoicism. The connection doesn’t end there, however, as purple (and its associated status) was often used in vivid analogies by later Stoics.

A famous one comes from the Discourses of Epictetus:

As the story goes, the Roman historian Florus asked the Stoic Agrippinus whether he should appear at Nero’s shows (ridiculous plays which Nero wrote and ordered participation in under pain of death or banishment).

Agrippinus replied: “Appear by all means.”

Florus: “But why do not you appear?”

Agrippinus: “Because I do not even consider the question. For the man who has once stooped to consider such questions, and to reckon up the value of external things, is not far from forgetting what manner of man he is.

Agrippinus: “Then go and act! But for my part, I will not act.”

Agrippinus: “Because you think yourself but one among the many threads which make up the texture of the doublet. You should aim at being like men in general — just as your thread has no ambition either to be anything distinguished compared with the other threads. But I desire to be the purple — that small and shining part which makes the rest seem fair and beautiful. Why then do you bid me become even as the multitude? Then were I no longer the purple.”

Marcus Aurelius, the Stoic Roman emperor who himself would have “donned the purple” as the phrase went, referenced the color in a different way.

Writing that his purple-hemmed cloak was nothing more than “sheep’s wool dyed with shellfish blood”, he reminded himself not to get carried away with the status associated with such luxuries.

So, ending on that piece of timeless wisdom I hope you enjoyed this brief exploration of Tyrian purple.

Just one question remains about your new favorite color: like Agrippinus, do you desire to be the purple?

How To Refresh And Reset Yourself