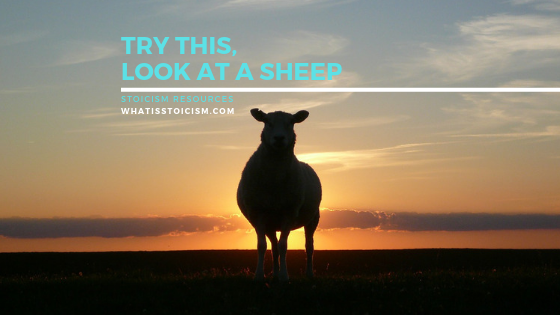 I enjoy watching animals doing nothing. Just as well really, they can be found doing nothing most of the time. If you live in the countryside, or travel there often, you might enjoy this too. It’s peaceful. Gazing into a green field at grazing sheep, I can focus on something much simpler than the things in my life that I have deemed to be complicated problems. But it’s not just the peace that appeals to me.

There’s a lot we can learn from animals. In describing Stoicism, Tim Ferriss jokes that on hearing the word, people might think of a cow standing in the rain — “it’s not sad, it’s not particularly happy, it’s just an impassive creature taking whatever life sends its way.” Tim uses this platform to go on and make the point that there’s a lot more to Stoic philosophy, but the animal angle can be extrapolated.

Sticking with Tim’s cow in the rain for now though. When I look into a field at a cow, it’s highly likely that it will be doing one of four things — standing, walking, lying down, or eating grass. It doesn’t place a value judgement on the weather; it doesn’t feel rain and say to the other cows, “Man this sucks, I can’t be bothered walking today.” It just walks. I know it can’t articulate spoken words anyway, or perhaps I just haven’t watched cows long enough to witness them speak, but you see what I mean. Weather is an external factor it can’t control, so it doesn’t worry about it.

In a similar vein, when I scan across the adjoining fields and look at a sheep, I don’t see it stressing. It isn’t categorising anything external to it as good or bad. It isn’t saying, “This grass has fallen below my high standards, I demand to speak to the farmer!” It accepts its fate, whatever that may be. Yes, it might trot to the tastiest turf at times, it might even look for a dry patch to lie down when it’s tired, but if circumstances render those unavailable, it’s content regardless.

It’s a misconception that Stoics, because they encourage acceptance of one’s fate, just passively allow things to happen to them and assume that any effort to the contrary is pointless. Stoics have no issue with making an effort to improve one’s circumstances, they just try not to view the outcome of that effort as either good or bad.

The only things Stoics view as truly good are the four cardinal virtues — wisdom, justice, courage, and temperance. The only true bad is therefore vice — the corruption of these virtues. Everything else is an “indifferent”, external things that we should not attach value judgements to. These indifferents can be “preferred” or “dispreferred” though. For example, good health is preferred to bad health and we should do what we can to be healthy, but we should not base our happiness on our health as it is ultimately out of our control.

Animals can learn what is “good” or “bad” through training, but there is, of course, a human making most of those categorisations in teaching the animal. They can appear to attach their own value judgements to things too, but it could be argued that they are actually demonstrating the concept of indifferents perfectly.

Good grass, for example, is a preferred indifferent in that an animal may choose it over bad grass, but it can be content either way. Similarly, pain is a dispreferred indifferent to an animal but it’s incurrence is not an irrecoverable evil. Donald Robertson summarises the equanimity of an animal when it encounters pain in his book How to Think Like a Roman Emperor –

According to the Stoics, our initial reaction to pain or illness may be natural and reasonable, but amplifying or perpetuating our suffering by complaining about it over time is unnatural and unreasonable. Animals may cry out in pain and lick their wounds for a while, but they don’t ruminate about it for weeks afterward or write letters to their friends complaining about how badly they’ve been sleeping.

And that’s what I try to learn from animals. I don’t want to spend unreasonable time perpetuating suffering after the initial pain of a situation has ended.

“Do not let us build a second story to our sorrow by being sorry for our sorrow.”

I’m over-simplifying here of course, there’s obviously a lot more nuance associated with animal psychology. But as I mentioned before, it’s simplification I am seeking when I look into a field. I’m thinking, look how that animal just keeps calm and carries on. I don’t know what pain it has gone through in life, but that’s what the pain is now — gone. Right now that animal is just standing, eating grass. Now it’s walking. Now it’s lying down. Soon it’ll be standing again.