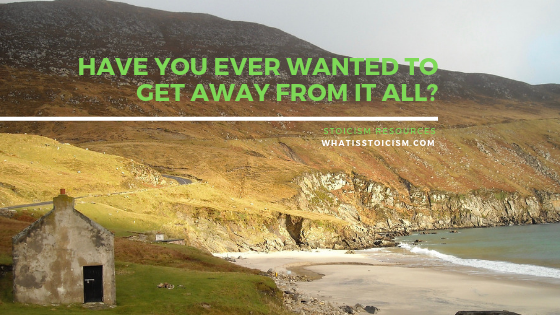 The phrase “get away from it all” is so common that it warrants its own definition in Collins English Dictionary. The Collins website explains it as follows: “If you get away from it all, you have a holiday in a place that is very different from where you normally live and work.” If you’re like me, you might sometimes wish for something more permanent than a holiday, but the definition is otherwise sound.

In 2009, Monty Halls spent six months getting away from it all in the remote Scottish village of Applecross. The aim of Monty Halls’ Great Escape was to leave city life and get back to basics by becoming self-sufficient as a beachcomber. It’s more than ten years since the show was first broadcast and it stuck with me so much that I recently picked up the DVD. I’m glad I did.

Seeing Monty once again converting a down-trodden bothy into “Beachcomber Cottage”, and setting up his small farm of pigs, hens, and crops stirred up the same feelings that had me so engaged a decade ago. It may seem idealistic or overly-romanticised, but there’s something about adopting a more rustic lifestyle, literally reaping what you sow, that is very inspirational to me.

Appreciate What You Have

There are many times early on in the show when it’s clear how happy Monty is on his adventure. But there’s a particularly lovely moment one evening as he’s preparing a freshly-caught seafood dinner on an open fire with his rescue dog Reuben watching on, when he contentedly takes stock of his surroundings: “Got my dog, got my langoustines, got my house, got my beach, got my sunset. This is it, this is the real deal.” His “gots” aren’t materially much, but in that moment he has absolutely everything he needs. In that Stoic moment, he realises he is wealthy.

“Wealth consists not in having great possessions, but in having few wants.”

It might sound like Beachcomber Cottage is a place of isolation, and that you’d soon go mad with just the animals to talk to, but Monty ends up with no shortage of human interaction after making friends with the locals, most of whom are a short drive away from his beach side home. So not long after arriving, Monty has shelter, food, water, friends and even electricity from wind and solar charging batteries. He invites his new friends round for dinner, and has reason to be thankful once more: “It’s the end of a perfect day. Glorious weather, great company and amazing homegrown food. It’s exactly what I’d always hoped for.”

It’s this sense of community so evident in Applecross that touches on another Stoic notion — that human beings are, by nature, supposed to help each other. Marcus Aurelius crystallized this attitude perfectly in one line:

“Men exist for the sake of one another.”

Monty makes his integration into the community easier by reciprocating the good deeds he receives in any way he can – after one successful day catching some crabs, he makes the rounds in the village and delivers them gratis to the locals. As in any tribe, a new member is accepted more readily when they prove their worth and willingness to help. What benefits the hive usually comes back to the bee in a good way.

Live In Accordance With Nature

To know that we need a clear definition, and Michael Dew, a Stoic scholar, provides one here:

“‘Human Nature’ refers to the condition of a human who is expressing the very best in his or her development, that is their ultimate ‘best self’. They are growing and changing in an effort to reach the ultimate goal for a human being.”

If we go by this, it is clear that Monty is indeed also living in accordance with Nature. We constantly see the new skills he learns and how he adapts to his unfamiliar surroundings. And if any more evidence were needed, he sums it up as he leaves Applecross at the end of his life-affirming six month stay:

“As I drive away from Applecross, the irony strikes me – I’ve learnt more in six months than I have in twenty years of travel, simply by staying in the same place.”

Indeed Seneca The Younger alluded to such a paradox in his letters to Lucilius, the implication being that peace must come from within, independent of location:

“The man who spends his life choosing one resort after another in a hunt for peace and quiet, will in every place he visits find something to prevent him from relaxing.”

In the last episode of Monty Halls’ Great Escape, he calls his beachcomber experiment the best six months of his life. Having gotten away from it all, he has learnt that his happiness is not dependant on material possessions, he better appreciates the value of a strong community, and he has found out what it means to live in accordance with Nature by constantly adapting and pushing himself to improve. What he has also discovered is the concept of Amor Fati – the importance of accepting what fate delivers to him:

Refresh And Raise Your Spirits

At the time of broadcast in 2009, the premise of Monty Halls Great Escape certainly struck a chord with many more people than just myself. Viewers immediately wanted to know more about Beachcomber Cottage, and the walkers website Walkhighlands saw a 1300% increase in visitors reaching them via Google searches for Applecross. Getting away from it all is an appealing concept.

Of course, it’s not usually practical to suddenly disappear into nature and start living off the land. Can you plan ahead and do it for a weekend though? Of course. Go camping, go fishing, get outdoors. Challenge yourself in new surroundings and live according to Nature. Can’t get away anywhere? Step outside your front door and go for a walk! Again, contentment has to come from within, so location doesn’t matter. Seneca even explicitly advocated walking:

“We ought to take outdoor walks, to refresh and raise our spirits by deep breathing in the open air.”

On Tranqulity of Mind