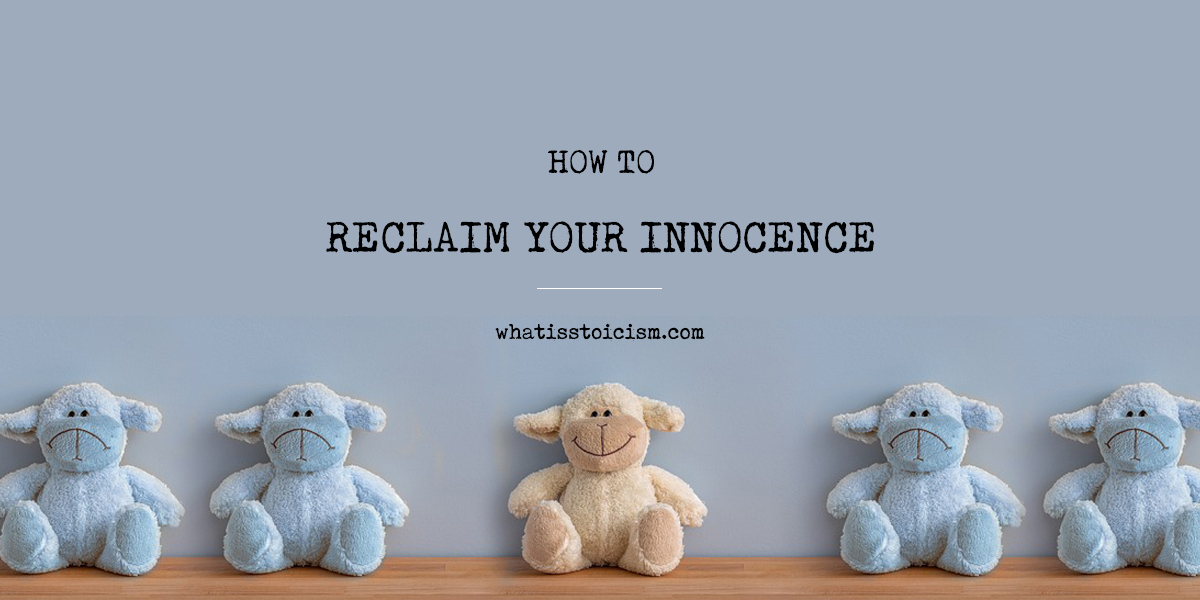 There’s a chapter in Anthony de Mello’s The Way to Love entitled Become Like Children. It outlines how a child can be influenced to lose its innocence and subsequently live a life that is so dependent on externals that they never truly know who they are. This may sound like an abstract notion, but I’ll get to real examples shortly to better illustrate it.

The point of the chapter is that, as readers, we may recognize how we have lost our own innocence, our own originality, and take steps to reclaim it. In doing so we can remove our dependence on external factors like the opinions of others and start to live with more freedom.

According to de Mello, there are four ways this loss of innocence can happen.

1. When grown-ups punish a child for telling the truth

“The chief task in life is simply this: to identify and separate matters so that I can say clearly to myself which are externals not under my control, and which have to do with the choices I actually control. Where then do I look for good and evil? Not to uncontrollable externals, but within myself to the choices that are my own . . .”

When a child is strongly discouraged from revealing what it thinks and feels, it learns to dissemble and its innocence is destroyed. In hiding the truth from others for a prolonged period, they end up hiding it from themselves. They don’t make choices for themselves – their choices are based on how others will judge them. The result is a person who, in stark contrast to a child that has retained its innocence, is rarely comfortable being true and open with anyone.

How often are you able to truly be yourself today?

2. When a child is infected by the desire to become somebody

“Alexander the Great and his mule driver both died and the same thing happened to both.”

Learning early in life to seek acclaim and recognition is a path to certain disappointment if and when that recognition doesn’t arrive. Even if it does, the satisfaction is temporary and more acclaim is soon sought. Anthony de Mello prescribes moving away from the ego and towards the impulse of Nature. In other words, doing work to the best of our ability and with good intentions will bring quiet self-fulfillment, while striving to be “somebody” is little more than a never-ending treadmill of self-glorification.

How many of your thoughts and actions are driven by the desire to be somebody?

3. When grown-ups teach a child to imitate someone

“Throw out your conceited opinions, for it is impossible for a person to begin to learn what he thinks he already knows.”

Originality gets lost when grown-ups try to make children carbon copies of others. The fear of ridicule or rejection leads the child to keep up this act of conformity and they can never dare to be themselves. It subsequently becomes difficult for the child to learn new things and form their own opinions when someone else’s opinion is always being used as a reference point.

How often do you copy someone else’s actions just to fit in?

4. When you compete and compare yourself with others

“I have often wondered how it is that every man loves himself more than all the rest of men, but yet sets less value on his own opinions of himself than on the opinions of others.”

Those who have maintained their innocence are able to blissfully be themselves. This is because they haven’t been sucked in to thinking of life as a competition. They don’t see others as being ahead of them and so don’t feel the need to try to overtake them. Achievement for them is a self-driven exercise brought about by comparing who they were yesterday to who they are today.

Are you seeking to improve for your own sake or someone else’s?

The beautiful thing is that even if all these points apply to us, even if our innocence has long left us, asking ourselves the questions gives us an awareness. With that awareness we can regain our innocence, we can feel the freedom of becoming like children.

“The first quality that strikes one when one looks into the eyes of a child is its innocence: its lovely inability to lie or wear a mask or pretend to be anything other than what it is. In this the child is exactly like the rest of Nature. A dog is a dog; a rose, a rose; a star, a star; everything is quite simply what it is. Only the adult human being is able to be one thing and pretend to be another.”