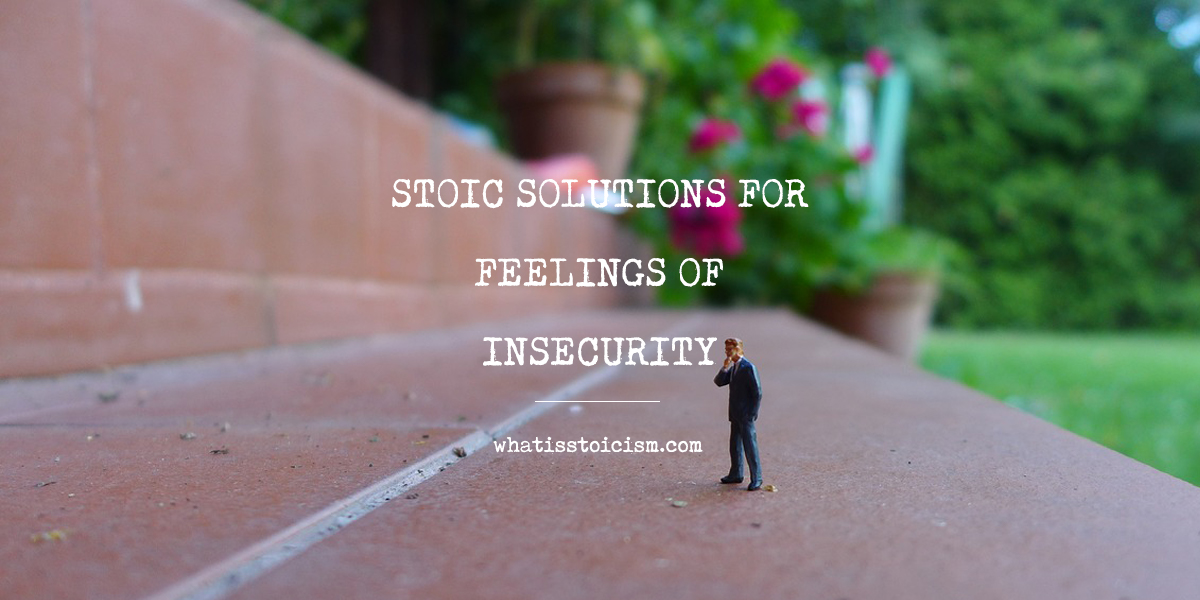 The feeling of insecurity is a constant threat to contentedness. We feel insecure about money, relationships, careers and a whole collection of other things that we believe need to be perfect before we can relax.

Some common reasons we might give for feeling insecure are:

These reasons, and most others we come up with, have one thing in common – they are external factors. For that reason, the reasons are wrong.

If we change our thoughts, if we focus on internal factors, it’s possible to make feelings of insecurity disappear without having changed the external factors at all.

To prove that it isn’t outside events but what one thinks about them that causes us to be insecure, we need only look at the fact that not everyone derives insecurity from the same situation. One person can feel secure with very little money in the bank, another can feel insecure with millions.

As Donald Robertson writes in How to Think Like a Roman Emperor:

Knowing not everyone sees a certain situation as catastrophic should make us more aware that the “awfulness” of it derives from our own thinking, our value judgments, and our way of responding rather than the thing itself.

So how do we reduce the number of situations that we derive insecurity from? How do we break our own programming?

Remembering these points is a good start:

1. You can’t ease feelings of insecurity by trying to change external factors

Man is disturbed not by things, but by the views he takes of them.

Like the example we used before, more money isn’t necessarily the answer to insecurity caused by a lack of money. Your perspective of a situation is key to formulating your response.

2. Feelings of insecurity are a result of your own thoughts

Today I escaped anxiety. Or no, I discarded it, because it was within me, in my own perceptions — not outside.

There are those in the same situation as you who don’t feel the same insecurity. It’s just that your programming is different from others. Just being aware of this is a good first step to changing it.

3. Your programming may be a result of following the examples set by insecure people

The chief task in life is simply this: to identify and separate matters so that I can say clearly to myself which are externals not under my control, and which have to do with the choices I actually control. Where then do I look for good and evil? Not to uncontrollable externals, but within myself to the choices that are my own.

You may have learned through watching others that striving to rearrange externals (make more money, seek recognition, elevate your status) to suit you is the way to deal with insecurity. It’s freeing to accept that this isn’t the way.

4. At some point in the past you were insecure about today

Never let the future disturb you. You will meet it, if you have to, with the same weapons of reason which today arm you against the present.

How many times in the past have you been insecure about some future event, but when it came it wasn’t as bad as you had feared? Preparing for the future is prudent, obsessing over it until it becomes an insecurity is a waste of energy.

5. There is no insecurity in the present moment

Memory brings back the agony of fear while foresight brings it on prematurely. No one confines his unhappiness to the present.

The present moment may be difficult but it isn’t unbearable, it isn’t insecure. Insecurity comes from the story you have created in your mind about what will happen later. Like animals who have no concept of tomorrow, try to enjoy the security of today.

Stoic solutions like this are not about blaming you for your past attitudes. They’re about finding a new perspective and making you realize that you have the power to deal with feelings like insecurity, you’ve always had the power. Read the points, re-read them later, take it slow – a change of programming doesn’t happen overnight and that’s OK.

Look within. Within is the fountain of good, and it will ever bubble up, if thou wilt ever dig.

How To See Through The Clouds

How To Return To The Present Moment

Why You Should Treat Criticism The Same As Praise