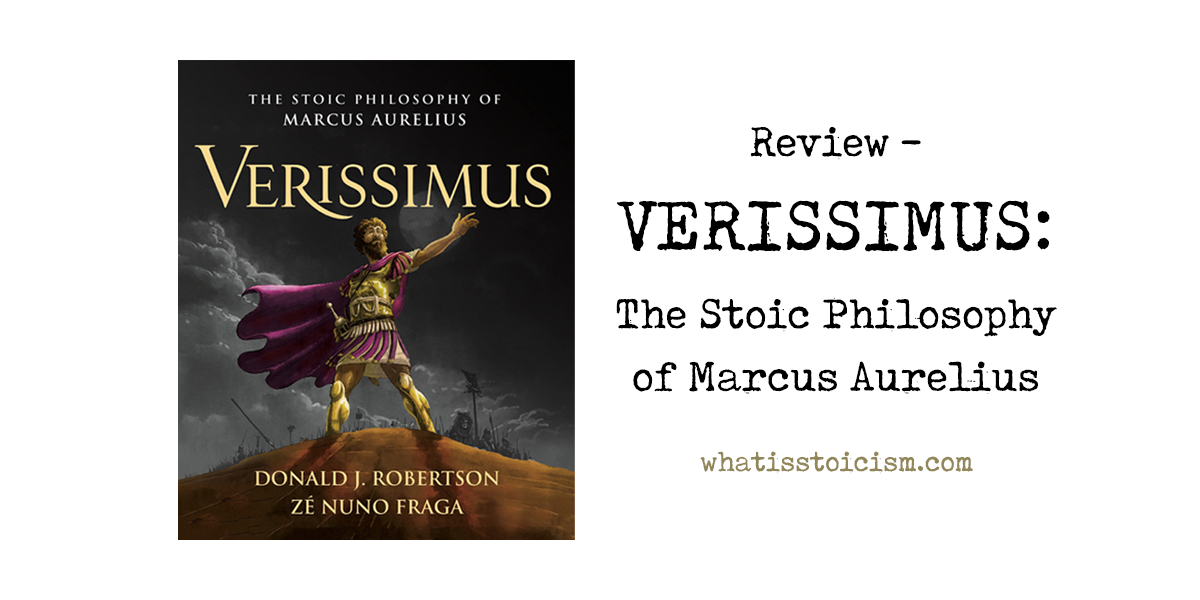 The author Donald Robertson is one of the preeminent authorities on Stoic philosophy today, that much can’t be argued.

Through titles like Stoicism and the Art of Happiness, The Philosophy of Cognitive-Behavioural Therapy, and the widely popular How to Think Like a Roman Emperor, Donald draws on his philosophical expertise and his background as a psychotherapist to deliver not just the theory of philosophy, but also its practical applications as a way of life.

In addition to his books, he has produced and contributed to many informative articles, videos, and interviews not only on Stoicism but also specifically on the Stoic emperor himself, Marcus Aurelius. These invaluable resources have all formed key components in my own learning about these topics.

I was delighted, therefore, to recently receive an advance copy of Donald’s latest work, Verissimus: The Stoic Philosophy of Marcus Aurelius, which is a foray into a new format for his content. The following is a short review of the book that brings Stoicism to the world of the graphic novel.

Stoicism in a graphic novel

If you’ve read a few Stoicism books, you’ll know that in general, they don’t contain many pictures. Marcus Aurelius lived between 121 and 180 AD. A lack of photographic technology in this era means we don’t have the luxury of Googling his name today and seeing him in any conceivable situation, the same way we might do with a high-profile figure in the modern world.

It’s refreshing, therefore, to have our imagination fed through the medium of the graphic novel. The renderings of Marcus and the world around him in Verissimus add vivid color to what we had previously only read in black and white.

It would of course be impossible to include every detail of Marcus’s story in this format; a certain selectiveness obviously had to be employed due to the spatial constraints of a graphic novel. But it’s this very limitation that keeps the story moving in an engaging way.

Verissimus’s impressive artwork comes courtesy of the award-winning illustrator Zé Nuno Fraga, who is based in Portugal. The dynamism of the graphics is vital in adding to the drama of the story and the reader gets a real sense of the turbulent atmosphere that was characteristic of the times in which Marcus Aurelius lived.

To denote information that seems dubious (for example gossip or a character’s imagination), Zé employs the device of presenting different parts of the story in differently shaped panels. This helps the reader maintain a healthy perspective on the overall work, and to remember this instruction from Donald Robertson that appears at the beginning of the book:

We don’t expect you to read this book as a conventional biography or a philosophy textbook… No, this is a “ripping yarn” about a great man’s philosophical, psychological, and spiritual journey.

The story of Verissimus is the story of Marcus Aurelius’s life. It begins at the emperor’s deathbed, where his contemplation of the events of his life serves as the reader’s window through which to view them.

As the graphic novel progresses, biographical detail seamlessly interweaves with philosophy: not only do we get an insight into Marcus’s personal journey but we get a clear sense of how Stoic philosophy helped him navigate the many challenges he faced.

Keen readers will smile knowingly as they spot subtle nods to The Meditations in Marcus’s words and thoughts.

An important note about the story concerns the theme of anger. As we know from The Meditations, Marcus revisits the topic constantly as a means of taming his own temper. Verissimus draws on this internal battle as well as the many external provocations Marcus faced in his life to show how philosophy can be employed to process and quell strong negative emotions.

Anger as a theme is also an astute choice for a graphic novel as Donald Robertson has mentioned elsewhere:

Anger is a preeminently visual emotion — it works well in comic book panels and makes for a more exciting story.

The great thing about Verissimus is that it’s accessible to people of all levels of expertise. Not only will it introduce Stoicism to a new audience, but it will also help reinforce key details and concepts for those already familiar.

Remember, however, as you read Verissimus, not to get too bogged down in extracting every piece of information immediately or analyzing every event — it’s a graphic novel, it’s an exciting and dramatic experience, enjoy it!