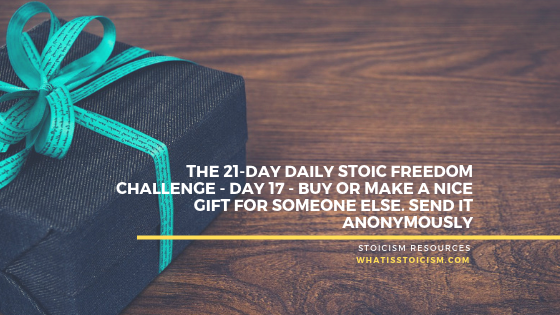 This is an account of day 17 of the 21-Day Daily Stoic Freedom Challenge, for accounts of other days please click here.

The task for day 17 of the 21-Day Daily Stoic Freedom Challenge is to buy or make a nice gift for someone else and send it anonymously. When we are kind, generous, charitable, we are not only helping others, we are helping ourselves. We are adding to our own happiness because the pay-off of a good deed is to have done it. If we expect nothing in return, as we shouldn’t, we can easily take pleasure from a kind act. We can be grateful that we had the opportunity to perform the act, to brighten someone’s day, not because we expect to profit from it.

We know how it feels when someone is kind to us, so it should feel good when we give someone else that feeling, says today’s instructional email from the Daily Stoic:

There’s something spectacular that happens when you do even a small act of kindness for someone. It is a powerful force—easy for the giver and magical for the receiver. If you’ve ever had someone tell you that you made their day even for something small like complimenting their outfit or leaving a generous tip, you’ve no doubt felt the magic. Or if you’ve ever been on the receiving end of some unexpected generosity—“Wow, what a legend, what an angel. They didn’t have to do that”—you might have delighted with that special boost of genuine happiness that comes with it. It does feel like something sent from above. The unexpectedness, the flash of goodness, is more than enough to turn someone’s day around.

Today, that is what your day is about: changing someone else’s. Buy or make a nice gift for someone else and either send it to them anonymously or give it to someone you don’t know.

I shouldn’t say much about today’s task other than how it made me feel because the whole point is not to seek credit for the kind act, as today’s Daily Stoic email stresses:

Anonymity and unfamiliarity are key to this challenge, because too often we are slaves to the dopamine hit we get from the pat on the back—virtual and literal—when we announce our charitable intentions. Retweets, likes, favorites, those become the currency of generosity too often these days.

Doing something good is enough in itself:

Marcus Aurelius would say, “When you’ve done well and another has benefited by it, why like a fool do you look for a third thing on top—credit for the good deed or a favor in return?” The Stoics see doing good as the only job of a human being. So why on earth do you need thanks or recognition for having done the right thing? It’s your job. This is what we’re here for. Born out of their belief of worldly interconnectedness—that everything in the universe is part of a larger whole, bees of the same hive—the Stoics established perpetuating abundance by doing good for others. They weren’t looking for recognition, they weren’t looking to call in a favor in the future, they weren’t looking for the third thing—they were generous because that is our job.

I’ll just say that today’s task involved buying donuts, and it made me feel good for the rest of the day (even better than if I had eaten them myself).

In the challenge’s group Slack channel, fellow participant Sunny also got into the spirit of today’s task:

I sent £10 in a thank you card to a girl who was so kind to me in a store. She won’t know who it’s from, I sincerely hope she gets it and it makes her smile

Anonymous acts of kindness can often be the best acts of kindness. It’s not always possible to do a good deed anonymously, especially if it’s time-critical. But if you’re seeking fame from your benevolent acts, you may lose sight of the important part – helping someone else, which the Stoics believed was the very purpose of a human being.