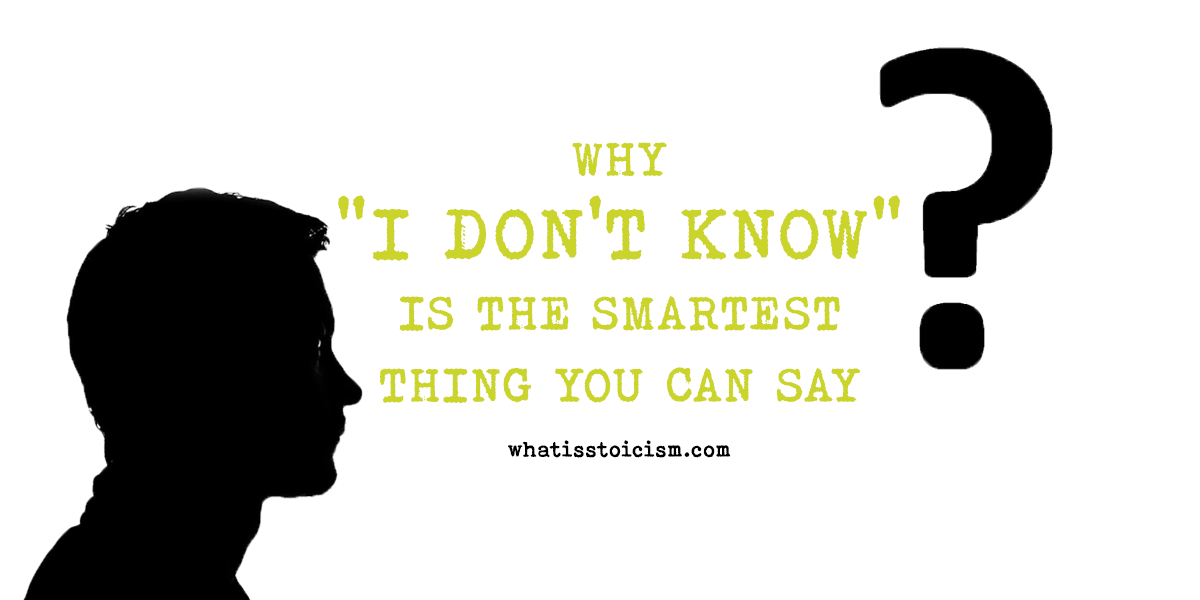 What is it about our lack of knowledge on a subject that hits us so hard?

Why do we get so defensive when we’re exposed as not knowing?

“What, you mean you didn’t know that?”

It wasn’t embarrassing before another human brought it to light, before that we weren’t trying to prove anything. But when others get involved we want to appear smart, we want them to value what we have to share. We want to believe we know what others know and that we know a little more on top of that.

We long for feelings of contribution and connection, as humans that’s normal.

Those feelings are challenged when we’re exposed for lacking a piece of information that someone else took for granted.

As a child, if the teacher asked you a question in class, you needed to immediately know the answer or you’d be embarrassed. In the playground, you had to know the way of the world beyond your years or appear naive. Even at home, you may have been expected to know behaviours you were never taught or face punishment.

As you got older you had to know what career path you wanted to take so you could confidently belt in for a many-years-long journey. In job interviews, you had to know all the correct responses, or at least what you were supposed to say. You thought that uncertainty in these situations would be disastrous and put you on the road to nowhere.

In the adult world, there are many norms you need to know, behaviours you should enact, phrases you should say at certain times. Know how to act around different people, know what’s in the news, know how to live. Because everyone knows how to live, right?

We think if we don’t know everything we’ll be left behind by those who do. We won’t be able to keep up with those who are gliding through life with their effortless knowing.

This isn’t a call to mediocrity. It’s not an excuse to coast in our various pursuits. I’m not saying we shouldn’t know anything, just that we should be less ashamed of what we don’t know.. There is no shame in not knowing, only in not wanting to know.

The curious child who says “I don’t know” wants to know. We’ve all been annoyed by an impudent young relative incessantly asking questions of us. They don’t care about looking foolish, they want to learn.

That innocent thirst for knowledge can later be lost as the world begins to reward certainty. Faced with a gap in your knowledge, your ego concludes you’ll be someone if you can bluff a half-answer rather than say: “I don’t know, but I’ll certainly find out for you.”

No, instead you force your mind to sew together an answer from whatever threads it can find to circumvent the terrible moment of ignorance. Ego blocks any admission of unawareness. It tells you you’ll be shunned if you can’t display expertise on the spot.

And it’s not just knowledge we feel the need to feign. We’re always being asked for our opinion on everything. So, put on the spot, we provide one. It might not be one we’ve thought through, it might not even be one we believe! But to appear to be someone participating in the world with their finger on the pulse of the thing, we send out opinions that we then feel forced to stick by.

It doesn’t occur to us to say: “Hmm I don’t know, I’ll think about it and get back to you.” Or: “Here’s what I think now, but that could change.” That approach, that rational approach, is almost unheard of.

We sense there is weakness in open honesty and mistrust in vulnerability when in fact it takes fortitude to be vulnerable and honesty actually builds trust.

For the most part I believe our unwillingness to say “I don’t know” comes from a pure place; we want to make a good impression. It’s what Italians call la bella figura (literally “the beautiful figure”). A common misunderstanding is that the concept is solely about appearance, but that is not the case as John Hooper explains in his book, The Italians:

“A lot of non-Italians have heard of bella figura. Far fewer understand what it really means… Fare una bella figura is to make a positive impression, though not necessarily in a visual way…

For the most part, the preoccupation with bella figura is harmless enough… There are elements in the bella figura mentality of a concern to fit in with the other members of society. In some respects, it counterbalances what Italians call menefreghismo: not caring a damn about other people.

But the bella figura mentality also points to a deep-seated insecurity, oddly at variance with menefreghismo.”

It’s the same for us: our need to make connections and contributions make us insecure to the point that we’re desperate to appear as if we know things.

What we miss is that these first impressions are fraught. Not only do they set a precedent (“I am someone who always knows”), they do not prove the content of our character which is only revealed over a period of time by our repeated actions.

In other words, if you are known to be someone who is prepared to say “I don’t know”, it gives more weight to what you do know; you have taken time to understand it, you didn’t rush to judgement, that’s your character.

If we’re patient with the child asking questions, we can nurture their enthusiasm for learning. We can show it’s worth learning about the world, worth discovering yourself, worth examining life. And we can reclaim that innocence in ourselves simply by being aware of it.

“I don’t know” is the key that unlocks the gate to learning. Without that admission, the journey ends. No one can be taught what they think they already know.

“If you want to improve, be content to be thought foolish and stupid with regard to external things. Don’t wish to be thought to know anything; and even if you appear to be somebody important to others, distrust yourself.”

There’s a world of improvement, of untouched perceptions and unseen viewpoints, of wisdom, learning, and knowledge waiting to be discovered if you’re open to looking foolish.

What, you mean you didn’t know that?

What’s Next For What Is Stoicism?