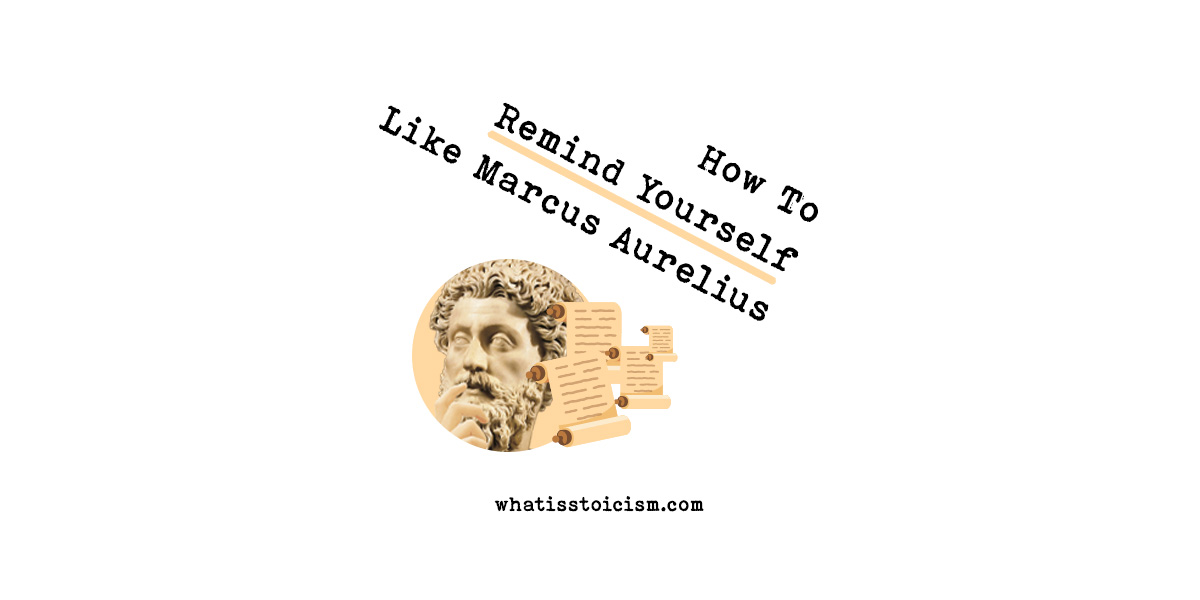 In his Discourses, Epictetus tells us that the practice of Stoicism is nothing more complicated than good preparation for what lies ahead:

But what is philosophy? Doesn’t it simply mean preparing ourselves for what may come?

By taking on the Wisdom of the ancients, by learning it and putting it into practice, we’re strengthening our defenses against the storms that Fate will inevitably send our way.

It’s only through repetition and regular reminders that we can be sure we’ll have the awareness to recall Stoic principles when they’re most needed.

We need to have the tenets of our philosophy of life ingrained in us so that enacting them becomes second nature when the mental fog of disturbance or crisis strikes.

It’s what Pierre Hadot was referring to in his book Philosophy as a Way of Life when he stressed the importance of always having our fundamental principles “at hand.”

One way to do this is to keep your own notes while you study so that they can be easily referenced in the future.

For example, you may find Stoic advice from various sources that all relates to one specific situation and wish to summarize it all in one handy place, ready to be called upon when that situation arises.

We can see this in action in Book 12 of Marcus Aurelius’s Meditations where the Stoic emperor gives himself eight reminders for when he faces difficulty in life:

When you find something hard to bear, there are things you’re forgetting.

1. That everything happens in compliance with universal nature.

2. That the wrong being done to you is someone else’s concern.

3. That everything that happens has always happened and will always happen, and is happening right now all over the world.

4. That the relationship between any one person and the rest of the human race is particularly close, not in the sense that they share blood and seed, but because they have intelligence in common.

5. That every person’s mind is a god and is an emanation of the divine.

6. That nothing really belongs to anyone, but his child, his body, and his very soul have come from heaven.

Here we can see Marcus use his own words to apply the Stoic virtues of Justice, Courage, Moderation, and Wisdom to any challenge he may face.

In doing so (and in just eight short sentences), he is invoking concepts like living in accordance with Nature, the dichotomy of control, amor fati, and memento mori.

By studying them, by practicing them, and by writing about them, he ensures that such fundamental principles will always remain “at hand” to him and that his philosophy is very much a lived one.

Here’s another example from the Meditations:

You must always have the following three points of doctrine readily available.

1. As regards your actions, that you should never act without purpose or do anything that differs from what Justice itself would have done; and as regards external events, that they occur either by chance or by providential design, and that you shouldn’t find fault with chance or censure providence.

3. That if you were suddenly in a position to look down from on high on human life in all its chaotic diversity, you’d find it singularly unimpressive, because you’d simultaneously be seeing all around yourself the great company of beings who populate the air and the aether; and that however many times you were raised aloft what you’d see would never change; it would just be the same old ephemeral things. And these are what we deluded beings consider important!

Try it yourself: note down principles and quotes you find helpful that relate to specific circumstances so that you can keep returning to them when needed.

If nothing comes to mind immediately, begin by writing out Marcus Aurelius’s own guidelines above and go from there. Following the personal principles of a Philosopher-King isn’t a bad place to start!