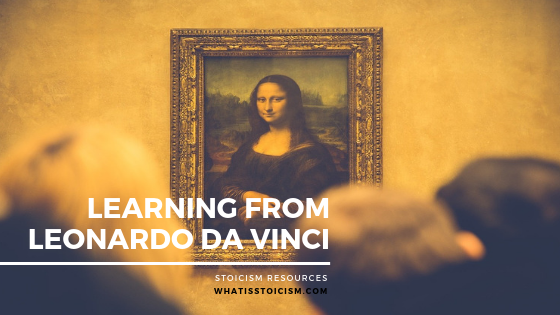 If you’ve ever heard the name Leonardo da Vinci, the first thing you’ll probably associate with the famous Italian is painting. His masterpieces are some of the most well-known works of art in history. The Mona Lisa, The Last Supper, and Salvator Mundi (the most expensive painting ever sold) were all produced by the careful strokes of Leonardo’s brush.

What you might not know, indeed what surprised me, is how many other disciplines he ventured into. In addition to painting, he was also highly skilled in invention, sculpting, architecture, science, music, mathematics, engineering, literature, anatomy, geology, astronomy, botany, writing, history, and cartography.

His competence as a polymath has rightly earned him the distinction of “genius.” But it is his insatiable thirst for the knowledge which resulted in that competence that is truly impressive. In his biography of the Renaissance master, Walter Isaacson describes him as having a curiosity that was “pure, personal, and delightfully obsessive.”

This obsession allowed his many interests to overlap. His research of anatomy and geology would inform his painting, while his love of science and engineering gave him countless ideas for inventions. The endearing thing about Leonardo is that none of his efforts were for fame or fortune, which Isaacson reminds us of throughout his book.

“He wanted to accumulate knowledge for its own sake, and for his own personal joy, rather than out of a desire to make a public name for himself as a scholar or to be part of the progress of history.”

One of the four cardinal Stoic virtues is wisdom. In his detailed descriptions of the virtues, Donald Robertson describes Stoic wisdom as “the ability which by itself is productive of human happiness; the knowledge of what is good and bad; the knowledge that produces happiness; the disposition by which we judge what is to be done and what is not to be done.”

Stoic wisdom is also referred to as prudence – in other words it is wisdom with practical application. It’s the ability to discern the appropriate course of action to be taken in a given situation at the appropriate time.

“Prudence is therefore closely related to the very meaning of the word “philosophy”: love of wisdom.”
– Donald Robertson

Leonardo da Vinci’s attainment of wisdom gave him the happiness that Donald Robertson refers to. At times he learnt for learning’s sake, going down rabbit holes of investigation simply for the joy of discovery. Additionally, the more he learned, the better informed he was to make decisions, and the better the results of his endeavours.

Throughout his life, and especially as he got older, Leonardo’s focus was on doing what was right for him at the time. Even as a highly sought-after painter, he was able to decide whether to accept lucrative job offers based not on their monetary value, but simply on whether he would enjoy the project.

It was that attitude that denied Isabella d’Este the privilege of having her portrait painted by the great da Vinci. A wealthy patron from an esteemed family, she could have rewarded Leonardo handsomely, however never one to be tied down, he evaded her desperate and relentless pursuit of his talents, preferring to work on other projects.

To draw further parallels (as the fervent learner would have done in his geometry studies) with Stoicism, we only have to look at the key aspects of Leonardo’s learning process.

Leonardo always had a notebook to hand and compulsively jotted down theories, reminders and instructions for himself. These were often accompanied by detailed sketches to add greater perspective to his ideas. Over 7000 pages of his notes have survived and they give unrivalled insight into a genius’s search for wisdom.

In similar fashion, Marcus Aurelius’s Meditations are a collection of the Roman Emperor’s notes that were never intended to be read by anyone other than himself. In what later became one of the great Stoic texts, Marcus was constantly instructing himself based on his experience of the world, building his wisdom as the years passed.

Never one to accept common consensus, Leonardo sought deeper meanings by doing his own experiments. He took pride in finding things out for himself having not been formally educated. In one of his notebooks he compared himself to those with greater education. “Though I have no power to quote from authors as they have, I shall rely on a far more worldly thing – on experience.”

The Stoics experimented too, practicing challenging situations to build resilience for when it would be needed. Seneca’s advice to prepare for hardship was to “Set aside a certain number of days, during which you shall be content with the scantiest and cheapest fare, with coarse and rough dress, saying to yourself the while: “Is this the condition that I feared?”

Despite Leonardo’s desire for experiential learning, he was also wise enough to first learn from those who had gone before him. “Those who are in love with practice without theoretical knowledge are like the sailor who goes onto a ship without rudder or compass and who never can be certain wither he is going,” he wrote in 1510. “Practice must always be founded on sound theory.”

To further his knowledge of Stoic philosophy , Marcus Aurelius was a keen reader of Epictetus’s teachings and realised the importance of learning the theory before writing about it himself. Today, we can’t hope to practice Stoicism to its fullest without reading the work of Marcus, Epictetus, Seneca, and others.

“While you are alone you are entirely your own master,” noted Leonardo on one of his many pages. Never one to chase the big payday, he placed much more value on time. On numerous occasions he turned down prestigious commissions in favour of pursuing something else he happened to be interested in. This enjoyment of his own pursuits may have limited his artistic output, but it made his life richer.

As Epictetus said, “No man is free who is not master of himself.” Leonardo da Vinci was a master of many disciplines, but he never became a slave to possessions, profit or pushy potential patrons.

A key tenet of Stoicism is learning to want what we already have, to appreciate what is around us on a daily basis. The idea is to alleviate the constant feeling of dissatisfaction that accompanies the desire for more. More possessions, more profit, more patrons prepared to pay.

We can learn how to do this from Leonardo da Vinci, just as Walter Isaacson did when he was writing his biography of the great man:

“After immersing myself in Leonardo, I did the best I could to be more observant of phenomena that I used to ignore… But I did learn from Leonardo how a desire to marvel about the world that we encounter each day can make each moment of our lives richer.”

Exercise: Define Your ‘Epithets For The Self’

Would You Choose Water Over Wine?