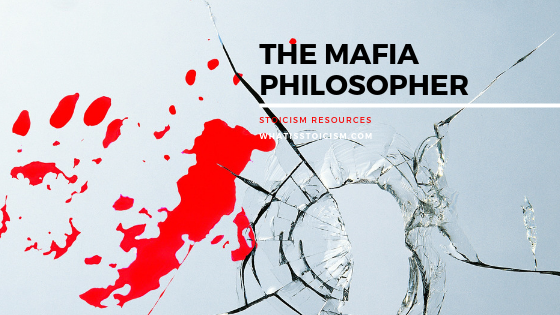 Shaun Attwood is a former stock-market millionaire and Ecstasy supplier turned public speaker, author and activist, who is banned from America for life. While incarcerated in Arizona from 2002–2007 for drug crimes, he developed a close relationship with a man known as Two Tonys.

On his prison blog, Attwood described Two Tonys as “a whacker of men and Mafia associate who was serving multiple life sentences for murders and violent crimes.” He left bodies from Tucson to Alaska, but claimed all his victims “had it coming.” Two Tonys died in prison in 2010, but his life story endures in The Mafia Philosopher, which he asked Attwood to write for him.

The book is written from the perspective of Two Tonys himself, and charts three phases of his life, including his time in prison, which are categorised as Before Drugs, During Drugs, and After Drugs. From descriptions of his early dealings with the Bonanno family, to first-hand accounts of murders, to matter-of-fact advice on how best to dispose of a body, Two Tonys tells all.

As you might expect, by far his most out-of-control phase was During Drugs, as he explains:

“The most horrendous and costly decisions I ever made in my life happened DD. People lost their lives. I lost control of my decision-making processes. My values changed completely. I didn’t value even life, family, oaths, vows, friendships.”

His drug usage, involvement in organised crime, and violent indiscretions all meant a stressful and turbulent life for Two Tonys, constantly in fear as he was of being killed or arrested. Luckily(!) for him it ended up being the latter and following his trial in 1993 he was condemned to spend the rest of his life behind bars. Not that he ever asked for sympathy:

“But I’ve got to be honest with you. I shouldn’t be allowed out of this motherf*cker. Prison was built for me. I accept that and live with it.

I’d hate you to have the misconception that I’m sad at never getting out. Doing my thing out there put me in here. It’s done. I can do this time for as long as I’m alive. I can’t do all of it, but I’ll do what I can. I’m doing it. No one else. Me. And I like doing it feeling good.”

This acceptance, even love, of his fate indicates the adoption of an Amor Fati attitude, something which couldn’t be easy for someone with no prospect of ever living free again.

For as much as Two Tonys hardship was self-inflicted, and as much as his deeds can’t be excused, there is still something admirable about how his attitude to life changed as he aged and became accustomed to his incarceration. And it seems his shift in perspective was a result of meeting Shaun Attwood and being encouraged by the Englishman to do a lot more of one thing — reading.

In just under six years inside, Attwood himself read over 1,000 books. By studying original texts in psychology and philosophy, he sought to better understand himself and his past behaviour. He credits books as being the lifeblood of his rehabilitation, and his influence was key in Two Tonys introduction to figures like Ralph Waldo Emerson, Blaise Pascal, and the great Stoic, Marcus Aurelius.

As the Seneca The Younger line goes, “Leisure without books is death, and burial of a man alive.” Through his reading, despite being locked away from so much of life, Two Tonys continued to live.

There’s a great passage in The Mafia Philosopher that shows just how much of an impact philosophy, including Stoic philosophy, had on the man who had no realistic hope of ever being released from prison. It’s a little long to be quoting verbatim, but it’s worth the read, so here it is:

“The next day, I said to Shaun, “Now, out of the books from yesterday, I’m really excited about this one: The Great Thoughts by George Seldes.” “What’s so good about it?” Shaun asked. I flipped to the introduction. “It’s right here. Blaise Pascal: ‘Man’s greatness lies in the power of thought.’ And Marcus Aurelius Antoninus: ‘Our life is what our thoughts make it.’ And here’s Emerson: ‘Great men are they who see that spiritual is stronger than any material force, that thoughts rule the world.’” “It’s powerful stuff,” Shaun said. “I need to work more on my spiritual side.” “These quotes are making me realise that I’m wasting my thoughts hating on people. For me to lay up and hate is like having a goitre on my neck.” I pointed below an ear. “Sometimes I just lay on my bunk, thinking about motherf*ckers I hate and fantasising about ways of killing them. It’s a goitre that keeps growing and growing, and I’ve got to cut it off. I’d like to get it surgically removed, but there ain’t no surgeon in the world with a scalpel sharp enough to cut this f*cker off.” “So how are you going to fix it?” Shaun asked, smiling. I put the book down and threw up my arms. “Aurelius is gonna be my surgeon! Pascal is gonna be my surgeon! Emerson is gonna be my surgeon! Life is nothing but thought, is it?

I could go to a restaurant and order a rack of lamb with mint jelly, rice pilaf, French bread, a bottle of Cabernet Sauvignon and, for dessert, Kahlua parfait made with vanilla ice cream, and maybe I’d finish with a Baileys Irish Cream and coffee, and hell yeah, I’d enjoy it at the time, but I’d also enjoy thinking about it afterwards as well. Just like I can lie on my bunk and instead of hating on motherf*ckers and thinking of ways to whack them, I can enjoy picturing when I was on the run in Waikiki and Maui, and how beautiful it was. It’s all about thoughts. This is an epiphany for me. Look, my goitre’s shrinking.” I tapped my neck. “When I feel hate invading my space, I’m gonna combat it by reading this book or whatever else I can get my hands on. The more I read, the more my thoughts turn to philosophy.”

Towards the end of The Mafia Philosopher, it’s a recurring theme how Two Tonys state of mind changes the more varied his reading becomes. As Epictetus said, “Only the educated are free.” Two Tonys gained his freedom, from his mental prison at least, through his education. An education that constantly reminded him of the Stoic notion to be grateful that things aren’t even worse:

“Recently, I reread Solzhenitsyn’s Ivan Denisovich. It keeps me inured to the conditions. Silly, I know, but it works. If old Ivan did it in those Siberian conditions with all those inbred Slavs, I can do it here in sunny Arizona with French toast and pancakes. No fish-eyeball soup for me.”

As someone who has become a much more prolific reader in recent years, it continues to amaze me how much of the world opens up when you start turning more pages. I hope you try it too.

If a man serving multiple life sentences — at risk every day of being killed should an old enemy wish to settle an ancient beef — can find a sense of serenity and even optimism simply by reading more, then surely anyone can.

How To Return To The Present Moment