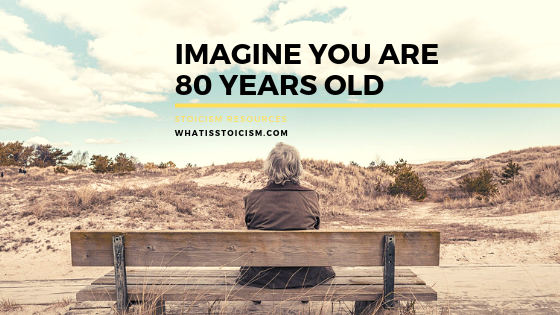 Imagine something for a second. Imagine you are 80 years old. Your skin’s a bit looser, you have whiter/thinner/no hair, your teeth are in a different room. If those things apply to you already I mean no disrespect — they’re all perfectly natural. But if you have to imagine, ask yourself these questions: looking back over my 80 years, what parts of my life am I proud of? How do I like to spend my time now, at 80 years old? What hopes do I have for the future? What room are my teeth in?

If that little exercise gives you pause, embrace it. Don’t hide from the thought. Don’t think, “that’s decades away, my teeth (after a quick check to make sure) are firmly in my gums, why worry about it now?” Think about the people you know who are over 80 — at one time they were the same age as you. They have already lived the years you have ahead of you, it goes quick. I don’t pose these questions to panic you or to be morbid, and neither did the Stoics when they practised Memento Mori.

The point is to prompt an evaluation of what’s important to you right now.

My grandmother just turned 82. I visit her every week and always receive a big cup of coffee and a plate of seven assorted cakes and biscuits. Always seven, I don’t know why. I eat and drink and ask her about her week, enjoy the conversation, and leave feeling energized. Energized partly due to the large dose of caffeine and sugar lighting up my nervous system, but mostly due to my grandmother’s infectious attitude to life.

She doesn’t have a big house or many expensive possessions. She has never been on a foreign holiday or driven a car. She has lived alone since my grandfather died 24 years ago. To some it will sound like she has missed out on a lot. To me, I love that she doesn’t need much to be happy.

As the Stoics believed, not needing wealth is more valuable than wealth itself is. It isn’t the amount of money, it’s the state of mind, that matters.

A few years ago my grandmother suffered a stroke. Now, occasionally, she gets things confused — names, places, memories. But she always knows when she has said something off-kilter. She’ll stop and think for a few seconds and correct herself, before laughing and making a joke about how silly she is. (“Sandra was here on Tuesday, she came on the bus. No…it was Sunday, no…Monday, no…Thursday, yes — Thursday! Got it in one!”)

She has also had several falls resulting in injuries of varying degrees. But I’m convinced that a barrier of barbed wire and rottweilers round her house wouldn’t stop her getting out to do her shopping, attending her weekly stroke support group and fulfilling her hair appointments.

Nothing holds my grandmother back for long, she accepts her fate and moves forward. She always accepts that fate in good humor too. I’m not sure if she has ever heard the term Amor Fati, but she certainly knows the meaning.

Someone else who doesn’t need much to be happy is Margaret Gallagher. At 77, she has lived her entire life off-grid. With no running water she crosses a field to fill a bucket up to ten times a day, and with no electricity for lighting she retires to bed as soon as the sun goes down. She is then up at 0530, heating a kettle on an open fire for washing and tea.

No central heating in the winter, no television to watch, no internet. It may seem an unimaginable lifestyle for most, but it’s refreshing how little dependence Margaret has on modern comforts: “You have the birds in the morning nesting in the house, you have the views, the tranquillity and peace, you have the clock ticking — all those things that you couldn’t put a price on.”

Her lack of exposure to a luxurious lifestyle has allowed her to maintain the ability to take delight in simple things. Margaret’s philosophy is to “be content with what you have” instead of seeking “everything big and shiny and better.” She may have been born in 1942, but that advice couldn’t be more relevant today. It echoes Seneca‘s sentiment that “the man who adapts himself to his slender means and makes himself wealthy on a little sum, is the truly rich man.” (Letters 108.11)

Will you need a lot of possessions, a lot of money, when you are approaching 80? Will you still be chasing shiny and better? Are you doing so right now?

Again, Margaret is 77 and my grandmother is 82, but they’re just pups compared to a lady named Sadie, who is 95. I don’t know her personally, but you can read more about her here. Sadie is another inspiring woman who isn’t beholden to material possessions or external circumstances. She thrives regardless, even in older age. Her children, not any earning or belonging, are what she is most proud of, she finds pleasure in simple things like a can of cola, and she took her first holiday abroad at the age of 70.

Sadie’s long life hasn’t been wasted wanting. Her perspective is perfect — the key to her contentment is gratitude: “I don’t look at the woman who lives beside me with the nice big car and all the things I don’t have, I look at the woman living on the other side who doesn’t have all the things I have and that’s what makes me feel grateful, counting my blessings for what I do have.”

Great achievements are impressive, money earned may even be too. But it is strength of character, attitude, virtue, where inspiration and respect lie. If an elderly person like Sadie can take stock of their life and have no regrets about not attaching meaningful value to material possessions, it gives me hope for the future. It makes me feel better about living for 65 more years, if I’m lucky enough to do so.

If someone like Margaret Gallagher can live for 77 years with no electricity or running water, then do I really need things like Netflix and Amazon Prime? I can’t imagine that in later years I’ll look back with pride on how many seasons of a fad show I binged, staring at a blaring rectangle as blankly as an apathetic monkey under hypnosis. Without distractions like Breaking Bad or Game of Thrones over the years, Margaret has found time for more constructive things like community work and has even received an MBE for her efforts. That’s something to look back on with pride.

My grandmother is now my only living grandparent and sadly I know we’re at the tail end of our time together. I try to remember what Tim Urban says when I sit down to my coffee and seven cakes — if you’re in your last 10% of time with someone you love, keep that fact in the front of your mind when you’re with them and treat that time as what it actually is: precious.

If I can get by with less, if I can appreciate what I have, if I can adopt the same attitude to life as Sadie, as Margaret, as my grandmother, I’ll be a happy man when I’m 80. And if anyone still visits me at that point they’ll get seven cakes every time.

I hope this makes you want to spend time with an older loved one or even make a new elderly friend. I also hope I’ve made you think about what’s important to you, and what you need to do right now to be able to look back later in life and say, “I’m proud of that.”